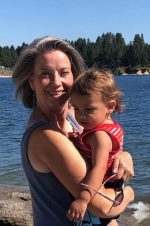 I (Mike Huston) met Pastor Mary Todd in the Spring of 2016, but at the time I didn’t agree with the idea of women pastors, it just wasn’t in my vocabulary. However, I was impressed with her passion for the Word, and her preaching was spot on. With other factors in play, I was already exploring the scriptures to see if what I believed matched what the bible had to say on the subject. To me, that was very important, as I believed in the Bible as the word of God, and needed to align with scripture, even if I was found to be in the wrong.

Since then, I have come to a better understanding of women in leadership, and what the Bible has to say on the subject. Today, it now makes sense that when a woman has the faith, and has the calling from God to preach, she has an obligation to exercise that gift, just as any man would and has. I know that Mary has faced many obstacles in her obedience to that calling, but she has remained faithful to God and the Word.

I would like to share with you what I learned about one of the key verses (1 Corinthians 11:3) that have been used to suppress women from becoming an elder, or a pastor, and a long list of other restrictions too numerous to count.

First Corinthians was written by Paul the Apostle about 55 A.D, while he was finishing up his three year stay in Ephesus, (1 Corinthians 16:8). It is believed that Paul founded the church in Corinth, Greece around 50 A.D.

When Paul penned 1 Corinthians 11:3, he was responding to and reminding the men folk in the church of Corinth, what unity looks like in Christ; and that the women who were bonded together with them also shared in that unity; and then Paul packaged this all up together into one church body through the unity that Christ had with the Father. This is how verse three is laid out with that understanding:

In America, we gravitate to an understanding that the word “head” is associated with “authority”, and we tend to interpret this passage that way, but how did the original audience understand it? The Greek word that was translated into the word “head” in verse 3 was most often used in reference to one’s physical head, but figuratively as it was in this case, carried the idea of kinship, association, and connection, such as a head and its connection to a body metaphor. Indicating a joint-body, or joint-union of two becoming one.

An example would be a man and a woman coming together in marriage, and becoming one flesh, no longer two, but one joint-union. A legal union. The source or kinship of woman is man, therefore man is head. This has nothing to do with who is in charge.

In conclusion, what Paul is trying to communicate is that both men and women together form the body of Christ, and in all that, they are enveloped within the union that exists between Christ and the Father. No, the idea of “head” as in male headship is not what Paul had in mind.